CAST, the performing arts program at Percy Julian Middle School, kicks off its 28th season with a performance of “A Thousand Cranes.” This touring show will be hosted by two of the elementary feeder schools to Julian – 7:30 pm on October 17 at Mann as well as 7:30 pm on October 22 at Longfellow.

Tickets are available in advance through the CAST website atwww.op97.org/CAST or may be purchased at
the door. For more information please contact Kathy Simon at 708 524 7848 orksimon@op97.org 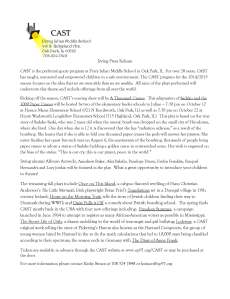 Tweets from the Irving Library